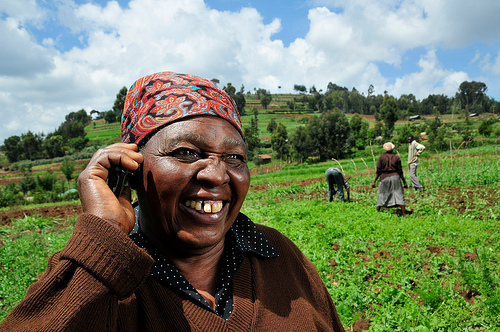 Through mobile telephony, new business models can be developed that offer greater opportunities and reduce risks for smallholders and  help to meet the challenge of feeding an estimated 9.2 billion people by 2050.

According a new analysis conducted by Accenture for Vodafone, many farming communities in emerging markets are economically excluded with little or no access to capital or banking services. The report titled, Connected Agriculture, states that smallholder farmers lack the means to trade (beyond basic barter arrangements), borrow to acquire new assets or invest to provide their businesses with sufficient resilience to withstand macro-economic changes.

Against this background, the ubuquitous mobile telephone has potential to help the poorest farmers towards greater food and income security. The greatest potential benefits can be generated by enabling mobile financial payments and mobile information provision, each delivering almost 40% of the total estimated increase in agricultural income, according to the report.

Given that global population is expected to reach more than 9 billion by 2050, requiring a 70% increase in food production above 2006 levels, there will be need for increased yields, particulalrly in emerging economies. In remote and rural regions, mobile telephony is expected to play a greater role in improving the productivity and sustainability of agricultaral systems.

According to the report, mobile telecommunications can connect farmers to markets, finance and education, making it possible to monitor resources and track products. This will unlock productivity potential while helping to manage the impacts of increased production, such as increased water use and greenhouse gas emissions.

“One third of humanity is fed through an estimated 500 million smallholder farms with less than two hectares of land. In Asia and sub-Saharan Africa the dependence is even higher, where small farms produce about 80% of the food consumed. These holdings are typically managed by families with limited technical and mechanical support and with poor access to finance. It is often difficult for them to make ends meet, let alone grow their business,” says Vittorio Colao, Vodafone Group Chief Executive Officer, in the foreword to the report.

“Looking ahead, the impact of climate change, water scarcity and increasing land scarcity will make this even more difficult. With the world’s population expected to grow by 750 million in 2020, and demand for food to increase by 70% by 2050, it is clear that something has to be done to improve the efficiency of food production and distribution.”

As access to mobile networks becomes increasingly available even in remote rural areas, the mobile phone can be used as a simple, inexpensive and convenient to not only stay in touch with friends and relatives but to also provide access to finance, improved healthcare solutions, supply chain efficiencies and increasingly automated mobility. In other words, mobile communications technology can be used as an enabler of sustainable growth particulalrly among marginalized and underprivileged populations.

“Mobile financial services can fill the banking gap felt by the poorest farmers. With access to savings or insurance services, farmers can reduce the impact of extreme weather events and invest in improving production. Meanwhile, mobile information platforms open up significant additional routes to potential markets, relaying information on prices for inputs and produce sales, as well as information on how to grow and respond to a context of climate change through the dissemination of reliable seasonal weather forecasts,” says Dame Barbara Stocking, Chief Executive Officer of Oxfam in the report.

Alone, under the hot sun, she weeds groundnuts in a sandy field with a hoe. Although she knows she will not get a good yield, she strives on, buckets of sweat pouring down her face. END_OF_DOCUMENT_TOKEN_TO_BE_REPLACED

We are at the very beginning of time for the human race. It is not unreasonable that we grapple with problems. But there are tens of thousands of years in the future. Our responsibility is to do what we can, learn what we can, improve the solutions, and pass them on.

South African President Kgalema Motlanthe urged African governments to do more work on climate change which threatens to unravel the lives of millions of people across the continent.

Mr. Motlanthe also called on the countries of the world to work in harmony in order to resolve the problem of climate change.

“Africa is one of the regions least responsible for climate change, but it is the most affected and least able to afford the costs of adaptation,” the South African newspaper Mail & Guardian quoted him. “”We must act. We owe it to the millions of people who will be directly affected.”

The issue of climate changes and its impacts has been the least of priorities for many African countries which are faced with numerous socio-economic and political challenges.

In addition, African government lack the financial wherewithal for technical innovation that have often been bandied as the solution to the problems presented by climate change.

In itself, South Africa is the largest emitter on the continent and depends on coal for 90% of its electricity needs. Moves to diversify to other energy sources have stalled due to a lack of policy framework and incentives for investors.

Mr. Motlanthe was quoted as saying that the problem of climate represented an opportunity to deal with the economic meltdown unraveling across the globe.

“As with climate change, this [economic crisis] is largely a crisis that is not of our own making but one which, like climate change, will affect us all and the poorest the most,” he said.

“For us in South Africa, the climate change challenge is therefore not only one of climate stabilisation, but it is ultimately also about combating poverty and promoting healthy livelihoods, energy security and sustainable development.”

Mr. Motlanthe stressed that the worst impact of climate change could be avoided if the rest of the world took up the challenge and acted in a united fashion.

Contrary to popular opinion, bicycling can potentially damage the environment due to the increased longevity of people engaged in physical activity, says Karl Ulrich, a Wharton Business School professor.

Ulrich argues that the greatest environmental peril society may face is the looming prospect of slowing the aging process, and bicycling potentially contributes to slowing aging.

Put simply, Ulrich says there is an underlying conflict between human-powered transportation, longevity, and environmental impact, which needs to be highlighted as the world seeks to find green solutions.

“The bicycle is a remarkable machine, allowing humans to transport themselves much more efficiently than by most other means. At the same time, physical activity, fitness, and health are almost axiomatically worthy objectives,” says Ulrich.

“And yet, the steady improvements in human health and longevity have a tremendous impact on the energy use and environmental impact of the human population.”

In a paper titled, “The Environment Paradox of Bicycling,” Ulrich argues that energy savings due to the use of human powered transportation may be offset by the increased energy used by living longer due to better health.

END_OF_DOCUMENT_TOKEN_TO_BE_REPLACED

Early night, the tide rises out of the sea like an elongated tongue and lashes a part of the shores of Kho Phi Phi island, located in Southern Thailand, throwing up an assortment of garbage, including plastic, wood, cigarette boxes, water bottles, metal, glass, paper, rope, cardboard, etc. 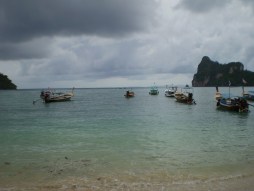 A stone throw away from a part of the shore, hordes of tourists from different parts of the world lounge on a sandy beach under a starry night, guzzling away to an antics-filled fire show, unconcerned about the sea’s spew.

Even though there are signs posted throughout the island encouraging visitors not to dump garbage, the sea’s vomit, so to speak, is evidence enough that only a few take heed of the message.

Khoi Phi Phi Island is part of 23 of 76 provinces in Thailand that are situated along the nearly 3,000-kilometer-long coastline blessed with impressive natural resources, including mangrove forests, coral reefs, beaches, and wetlands.

But these unique resources are coming increasingly under threat from urban and industrial development, and tourism.

The hyper-human activity on Kho Phi Phi’s mainland undoubtedly brings with it much needed cash to the locals, but so is it bringing counter-productive environmental damage. Everywhere on the mainland construction is taking place to accommodate thousands of tourists eager to enjoy the island’s white sand beaches.

In fact, due to high levels of tourism, Thailand’s island and marine life are bearing the brunt of human waste. Nothing mirrors this as much as the little dead fish that are also a part of the heaps of trash that find their way to the shores.

Every day, hundreds of boats drone away from the harbor of Khoi Phi Phi loaded with tourists interested in snorkeling in order to observe underwater attractions, disturbing marine life in the process. To make matters worse, tourists bring with them packaged food items on boat trips, and many empty packages end up in the sea.

In addition to noise pollution, the boats spew ton-loads of smoke and oils into the sea, choking marine life. In general, port operations and marine transportation continue to be sources of pollution, including from the coating on vessels, the transportation of invasive species, and accidents resulting in oil spills.

According to a World Bank report, Thailand’s marine and coastal resources are being lost or degraded as the population in the coastal provinces has grown and economic activities such as tourism, ocean transportation, and marine fisheries and aquaculture have increased over the past decades.

Marine-based pollution and run-off from the land have resulted in several locations with degraded or severely degraded water quality, says the World Bank.

Unless urgent action is taken Thailand stands to significantly lose from the degradation of its infamous natural resources. The outgrowth of tourism has severely put pressure on the environment of islands, and needs to be mitigated.

“While this overall growth brings short-term benefits to the people of Thailand, it must be combined with a sustainable management of the natural resources in the coastal areas to preserve those resources — and its values — for current and future uses and generations,” says the World Bank report titled “Blue Waters Under Threat.”

Though Thailand has environmental policies and regulations for protecting and preserving resources, there is very little to no implementation and coordination among agencies.

There is need to involve island communities in the management of marine and coastal resources. More importantly is the need to educate tourists about their role in the protection of island environments.

Because tourists are literally on the move, they tend to pay little attention to the environment impact of their actions. Thus, tourists need to be made aware that they too have a responsibility to keep Thailand’s idyllic island free from pollution.

“Imagine if every tourist that came to the island took away a plastic bag filled with garbage, the positive impact on the local environment will be massive,” said Tina Traveri, a tourist to Khoi Phi Phi.

So, though the idyllic islands of Thailand’s pristine white sands have provided pleasurable experiences to holiday makers, a lot of work needs to be done to ensure that the national government, locals and tourist protect and preserve them for current and future uses.