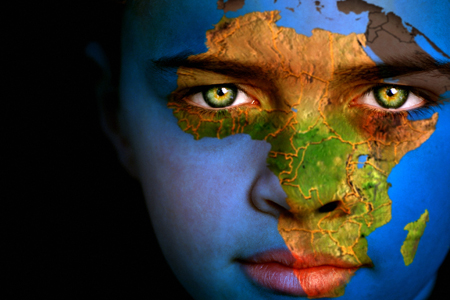 Alone, under the hot sun, she weeds groundnuts in a sandy field with a hoe. Although she knows she will not get a good yield, she strives on, buckets of sweat pouring down her face. END_OF_DOCUMENT_TOKEN_TO_BE_REPLACED

Early in the morning, Mary Kanyaire, 33, collects water and firewood, and then prepares a meal for her two school-going children before she heads out to the fields, approximately 3 kilometers away from her homestead.

Alone, under the hot sun, she weeds groundnuts in a sandy field with a hoe. Although she knows she will not get a good yield, she strives on, buckets of sweat pouring down her face.

For Kanyaire and millions like her, subsistence farming is the only source of survival and is practiced with absolutely no support from the government.

In recent years, climate change, which has resulted in an inconsistent rainfall pattern, has dealt a heavy blow to the prospects of subsistence farming.

Yet in Zimbabwe, as in many parts of Africa, the government offers little or no support to subsistence farmers, leaving them to the vagaries of the elements and economic and political shake-ups.

Agriculture in Africa is primarily a family activity, and the majority of farmers are smallholders who own between 0.5 and 2.0 hectares of land, as determined by socio-cultural factors.

Women provide about half of the labor force and produce most of the food crops consumed by the family.

Many of the men leave for urban areas in search of better opportunities, and when they make it in the city, they invest little in their rural areas.

In order to make agriculture work in the fight against poverty, African governments and donors must reverse years of policy neglect and remedy their underinvestment and misinvestment in agriculture.

Despite rapid technological progress, in the 21st century, agriculture continues to be a fundamental instrument for sustainable development and poverty reduction, states the report.

Although agriculture alone cannot resolve the problem of poverty, “it has proven to be uniquely powerful for that task.”

“Agriculture contributes to development as an economic activity, as a livelihood and as a provider of environmental services, making the sector a unique instrument for development,” says the report. “Agriculture can be a source of growth for the national economy, a provider of investment opportunities for the private sector and a prime driver of agriculture-related industries and the rural nonfarm economy.”

The report emphasizes that the time has come time to place agriculture afresh at the center of the development agenda because “agriculture and its associated industries are essential to growth and to reducing mass poverty and food insecurity.”

However, in sub-Saharan Africa, a combination of technical, economic, social and political challenges have to be overcome to make agriculture key in reducing extreme poverty and hunger.

“Using agriculture as the basis for economic growth in the agriculture-based countries requires a productivity revolution in smallholder farming,” states the report.

“To influence Africa’s green revolution, a key priority is to increase the assets of poor households, make smallholders — and agriculture in general — more productive, and create opportunities in the rural nonfarm economy that the rural poor can seize,” adds the report.

Political willingness will be critical to making agriculture a source of empowerment for the often-marginalized rural smallholder farmers.

Also, Africa needs to take advantage of the available new technologies to boost its agricultural productivity. Although Africa can learn from the agricultural systems of other continents in the world, it is clear that a new paradigm will have to emerge in the continent — a new paradigm that takes into account the challenges such as climate change, as well as the new opportunities presented by technology.

African governments in partnership with donors need to invest heavily in the infrastructure of rural areas, which will include building new roads, access to electricity to improve access to markets among other issues. Without a green revolution, Africa will remain forever locked up in poverty.

And for Africa’s new generation, such as Kanyaire’s children, that green revolution is something that should be fought for to expand opportunities.

Early night, the tide rises out of the sea like an elongated tongue and lashes a part of the shores of Kho Phi Phi island, located in Southern Thailand, throwing up an assortment of garbage, including plastic, wood, cigarette boxes, water bottles, metal, glass, paper, rope, cardboard, etc.

A stone throw away from a part of the shore, hordes of tourists from different parts of the world lounge on a sandy beach under a starry night, guzzling away to an antics-filled fire show, unconcerned about the sea’s spew.

Even though there are signs posted throughout the island encouraging visitors not to dump garbage, the sea’s vomit, so to speak, is evidence enough that only a few take heed of the message.

Khoi Phi Phi Island is part of 23 of 76 provinces in Thailand that are situated along the nearly 3,000-kilometer-long coastline blessed with impressive natural resources, including mangrove forests, coral reefs, beaches, and wetlands.

But these unique resources are coming increasingly under threat from urban and industrial development, and tourism.

The hyper-human activity on Kho Phi Phi’s mainland undoubtedly brings with it much needed cash to the locals, but so is it bringing counter-productive environmental damage. Everywhere on the mainland construction is taking place to accommodate thousands of tourists eager to enjoy the island’s white sand beaches.

In fact, due to high levels of tourism, Thailand’s island and marine life are bearing the brunt of human waste. Nothing mirrors this as much as the little dead fish that are also a part of the heaps of trash that find their way to the shores.

Every day, hundreds of boats drone away from the harbor of Khoi Phi Phi loaded with tourists interested in snorkeling in order to observe underwater attractions, disturbing marine life in the process. To make matters worse, tourists bring with them packaged food items on boat trips, and many empty packages end up in the sea.

In addition to noise pollution, the boats spew ton-loads of smoke and oils into the sea, choking marine life. In general, port operations and marine transportation continue to be sources of pollution, including from the coating on vessels, the transportation of invasive species, and accidents resulting in oil spills.

According to a World Bank report, Thailand’s marine and coastal resources are being lost or degraded as the population in the coastal provinces has grown and economic activities such as tourism, ocean transportation, and marine fisheries and aquaculture have increased over the past decades.

Marine-based pollution and run-off from the land have resulted in several locations with degraded or severely degraded water quality, says the World Bank.

Unless urgent action is taken Thailand stands to significantly lose from the degradation of its infamous natural resources. The outgrowth of tourism has severely put pressure on the environment of islands, and needs to be mitigated.

“While this overall growth brings short-term benefits to the people of Thailand, it must be combined with a sustainable management of the natural resources in the coastal areas to preserve those resources — and its values — for current and future uses and generations,” says the World Bank report titled “Blue Waters Under Threat.”

Though Thailand has environmental policies and regulations for protecting and preserving resources, there is very little to no implementation and coordination among agencies.

There is need to involve island communities in the management of marine and coastal resources. More importantly is the need to educate tourists about their role in the protection of island environments.

Because tourists are literally on the move, they tend to pay little attention to the environment impact of their actions. Thus, tourists need to be made aware that they too have a responsibility to keep Thailand’s idyllic island free from pollution.

“Imagine if every tourist that came to the island took away a plastic bag filled with garbage, the positive impact on the local environment will be massive,” said Tina Traveri, a tourist to Khoi Phi Phi.

So, though the idyllic islands of Thailand’s pristine white sands have provided pleasurable experiences to holiday makers, a lot of work needs to be done to ensure that the national government, locals and tourist protect and preserve them for current and future uses.