Harare, Zimbabwe – A new project, Girl Child Creativity, aimed at mitigating the under-representation and unbalanced participation of young females in the arts in Zimbabwe was launched last week in Harare. 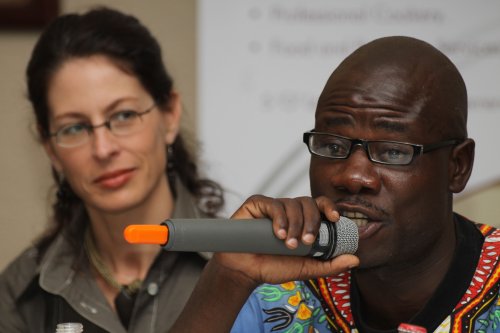 The project which is a brainchild of  internationally acclaimed performance poet and writer, Mbizo Chirasha and veteran filmmaker and broadcaster, Agnes Gudza, is aimed at enhancing the ability of girl-children to develop themselves mentally and creatively.

“The aim of this project is to reduce the under-representation of young women in the creative industry. We want to teach the girls how to find opportunities with their talents and develop them. We want to avoid the syndrome in the country currently where people want to fly yet they can only crawl,” said Chirasha.

Agnes Gudza, operations manager of the project and renowned filmmaker, said that the project was aimed at empowering the mental capacity of young girls so that they can become creative in all aspects of the arts and their lives.

She added that the purpose of the programme is to reach out to a lot of girls especially in the rural areas.

“We want the girl child to improve the state of their lives and livelihoods through the ability to be creative. We are also going to make a film on the importance of empowering the girl-child. The script for the film is already done and is currently being edited,” said Gudza.

Chirasha said GCC is working in collaboration with the US Public Affairs, the New Ambassador Hotel, the Girl Child Network in Zimbabwe as well as Chiedza Childcare Centre to reach out to disadvantaged and marginalized girls in the country. He said that the first part of the programme will be rolled out in Harare before moving to Gweru, Masvingo and the rest of the country.